The buzz this weekend in New Orleans is all about the anniversary coming up. Katrina, the storm that changed the city.

I was a fairly regular journalist in 2005, so this morning I took a look back at August 22, 2005.
It was a Monday. But like today, a Sunday, I was packing. Not for a storm evacuation, but for a vacation to the west coast to see my sister Rachel get married followed by a trip out to the Nevada desert to experience Burning Man. The post has a tone of excitement, listing material packed for desert survival and for costuming at the festival. We were ready to pack a trailer not of belongings to save, but of supplies to use in recreation. No awareness of a storm to come.

5 years later, my packing was quick and routine, clothing and laptop for a week of working away from home. Flying rather than driving. Alone rather than with Craig. Traveling for work rather than for pleasure.
There is a storm, Danielle, named today, but it is still far out in the Atlantic, and not even expected to approach the Gulf.

Not being the word smith that so many other people are, I am doing my 2009 recap in pictures.

Image heavy, so I will put it under a cut. 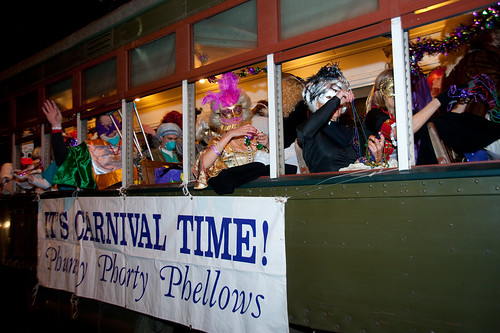 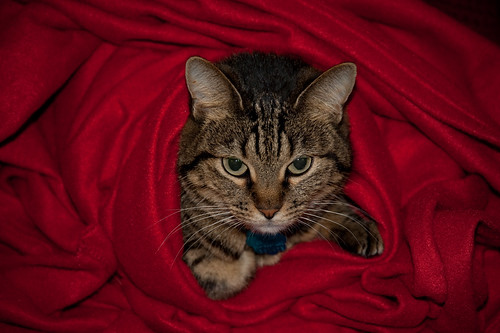 Brin seems a little upset that I am disturbing her by taking her picture in all of her snuggie-comfort. She is nestled in one of the sleeves.

I stayed in California this weekend for work, and got a break for today. Instead of staying cooped up at the hotel, I did a bit of exploring.
( Collapse )

I am definitely investing in goggles for my next ride.

Riding Orpheus Monday near Milan & St Charles I was struck in the eye by a throwback bead(s).

I saw (from my good eye) the early teen brat who threw them (and was laughing), but of course the float was moving and no cop in sight.

The pain in my eye was so blinding that I actually sat down for a few blocks to let it tear and hopefully get dirt out of it. Thankfully, it did not appear to be cut. If I missed you Uptown after Milan and before Louisiana, that is why.

I did get up and continue to enjoy my ride after that, though I noticed more throwbacks this year than last.

Other than the eye incident, I had a wonderful ride. Bigger crowds on the street than I had seen in years!

Friends staked out across from St Stephen’s School, a block up from Magazine. The crowd filled in a bit around parade time, but certainly not the sardine packed situation that happened on Thursday.

Hermes had some float trouble early, but once the tractor replacement was made, they rolled without further issue. Hermes has strayed away from the long pearls that once were their signature bead, but I liked the fact that a lot of their throws had the krewe name on them.

The floats themselves were really pretty, with one float actually thundering with streaks of EL wire lightning as it rolled past. The Dionysus depiction (rumored to be modeled after Jim Morrison) was wonderful eye candy. Because d’Etat & Morpheus were coming down Magazine where Craig works, he was able to close early enough to actually come out and see Hermes. We had been treated to a sneak peek at the den a while back, but there is nothing like seeing the rider clad floats rolling past.

D’Etat started at the same time Hermes did, but from Magazine & Jefferson. They fell in right after Hermes. Craig was able to snag a couple of their carnival bulletins as I photographed the skull club. We LOVED the Papal Police dance troop. We could hardly stop laughing as they line danced their way up the street. D’Etat is not as pretty as Hermes, but the satire was great as always, and the riders were throwing decently. Everyone in out group ended up with at least one blinking item. Hail the Dictator! You men gave us a great show.

Morpheus, the third parade of the evening, is neither extremely pretty nor satirical, but the riders had sprit last night. They were decent with throws and I don’t think I saw a single frown on any rider’s face. Most of the crowd dispersed as Morpheus was rolling, leaving out group solo on out little patch of ground. We were rewarded for staying. I was on a step ladder (pulled back) to take pictures, and started throwing out my arms and screaming “Throw me Something!” as the floats were in front of us. My favorite reaction was the top rider who threw a single strand of 8mm 33” beads and roared with approval as I caught them. I cheered right back at him! A good part of the fun is just the recognition.

I was sad to hear this morning, of the shooting on the route in the Garden District. Guns have no place at a parade.