Yesterday was a 3 parade night Uptown. We have traditionally caught parades on Napoleon Avenue near Pitt, across from Sophie B Wright middle school.

Our friend Zoe rides Muses. Her husband Robbie and son Connor are among the people who view the parade with us. Traditionally, the first one out will save some space for the rest of us.

I got news a bit after noon that the neutral ground space on Napoleon was already filling up for the evening parades. This was alarming news, as people generally would wait till mid-afternoon to get out on the route. Robbie was concerned, because he wanted to have a decent spot to see Zoe, but would not be able to get to the route till after 3:30 when he picked up Connor.

Craig & I managed to get to the route about 2:45, closely followed by another friend Deb. We found one of the few spots left by the street between Napoleon & Pitt and set up chairs and a small table. I laid a stepladder down in back of us and saved some space for Robbie. All was well and good. Mission accomplished.

Across the street, a spot that normally never fills up till the last hour or so, a pick up truck pulled up, dumped a bunch of ladders, and proceeded to put caution tape up over them then tied to a nearby tree to save space. 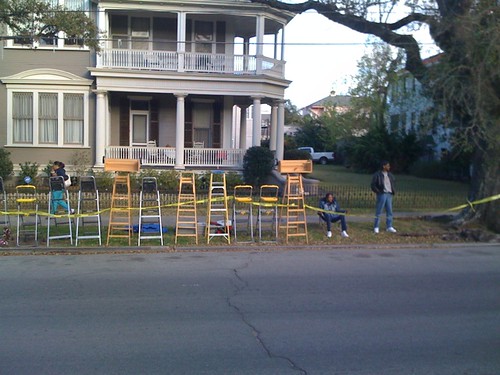 Ladders roped off street side at the corner of Napoleon & Pitt before the parades on Thursday 2/19/2009. By ordinance, ladders must be as far back from the curb as they are tall and not be connected. These were never pulled back.

Robbie and Connor finally arrived a little after 4. They set up their chairs and step ladder (properly pulled back from the curb). Closer to parade time, we were joined by other friends. Seeing that we did not need as much space as originally thought, we pulled everything together and actually freed some space by the curb. Some nice folks from Kansas, who were attending their 1st parade moved some folding chairs and sat next to us.

Parade time came and Babylon began to roll. A few kids with families in back of us came forward and stood among us to see the parade. This happens annually. We don't own the ground, never rope it off (as others have taken to doing) and the kids were not pushy, rather just filling in some open spaces.

About half way through Babylon however, we were invaded. Apparently, "Kipp: Believe College Prep" (http://www.kippbelieve.org/) decided to BUS classes of kids to the parade route. All of a sudden, upwards of 50 kids pushed and shoved up all around us, literally cramming themselves into every iota of space they could find. They were pushing folks seated in chairs, stepping on the lower steps of the step ladders and griping about us, who had already been there for hours. There were at least 2 teachers (or other adults) with them, but they were either unwilling or unable to control the kids.

After Babylon ended, the kids further back kept pushing forward, vying for spots closer for the next parade. I turned to Craig and told him to pack up. I was not going to be pushed and shoved for 2 more parades. Even in the obvious act of packing up, it was hard to get the kids to make room. Craig finally yelled at a few of them to back off. We got packed, apologized to Robbie, Conner and friends that we couldn't stay, and took everything back to the car. I'm sure the kids who immediately crammed into the vacant space saw it as a victory.

Craig & I decided to head toward the end of the route, while Nicolle, Beaux & friends (who left with us), simply moved to a new spot Uptown, where Nicolle said they were able to still view the parade and had a nice time.

We parked at Harrah's and visited with friends staying near Poydras & Tchoupitoulas. We were able to relax a bit, have some refreshment and enjoy the company of friends while using WDSUs parade tracker to monitor were the parades were. It was through the tracker that we found out Chaos had broken down Uptown, letting us wait in comfort rather than outside.

As Chaos finally neared, our group trekked over to Gravier & Tchoupitoulas to await Muses. Craig & I, wanting to see Chaos, walked up to Gravier & St Charles in hopes of finding a spot. Amazingly, there were spots on the rail open, just past a viewing stand. We talked to a few folks near us to pass the time prior to the arrival of Chaos. It turned out to be a fantastic spot for photographing the parade, and I really enjoyed seeing this years satire. Walking back to Tchoupitoulas, were even got to see the last few Chaos floats again as they rolled to disband.

Muses is just a fun parade. Tchoupitoulas crowds are lighter (though still heavier this year than in the past), and even though some riders are out by the time they reach you, there are still plenty of throws to go around. I had signs to a few floats, and weer able to catch the attention of some, and were missed by a couple others. As a float rider myself, I know just how easy it is not to notice a sign.

When I saw Zoe on the float, she did not look happy. I walked alongside and she said she would explain later. So after the parade ended, I called. She had not run out of beads by Tchoupitoulas, she had simply stopped throwing out of discouragement. People were being rude to her, even swearing at her earlier on the route. Float riders spend a lot of their own money on throws. On the route, spectators are recipients of gifts. Yes, everyone would like that "special" throw, but it is simply not going to happen for everyone. With Zoe, everyone seemed to want a decorated shoe and were being rude and throwing stuff back if that was not what she was throwing. At one point, someone even threw a shoe bracelet (one of my fav Muses throws) back at her. I can't say I blame her for sitting down.

The audacity of people never ceases to amaze me.